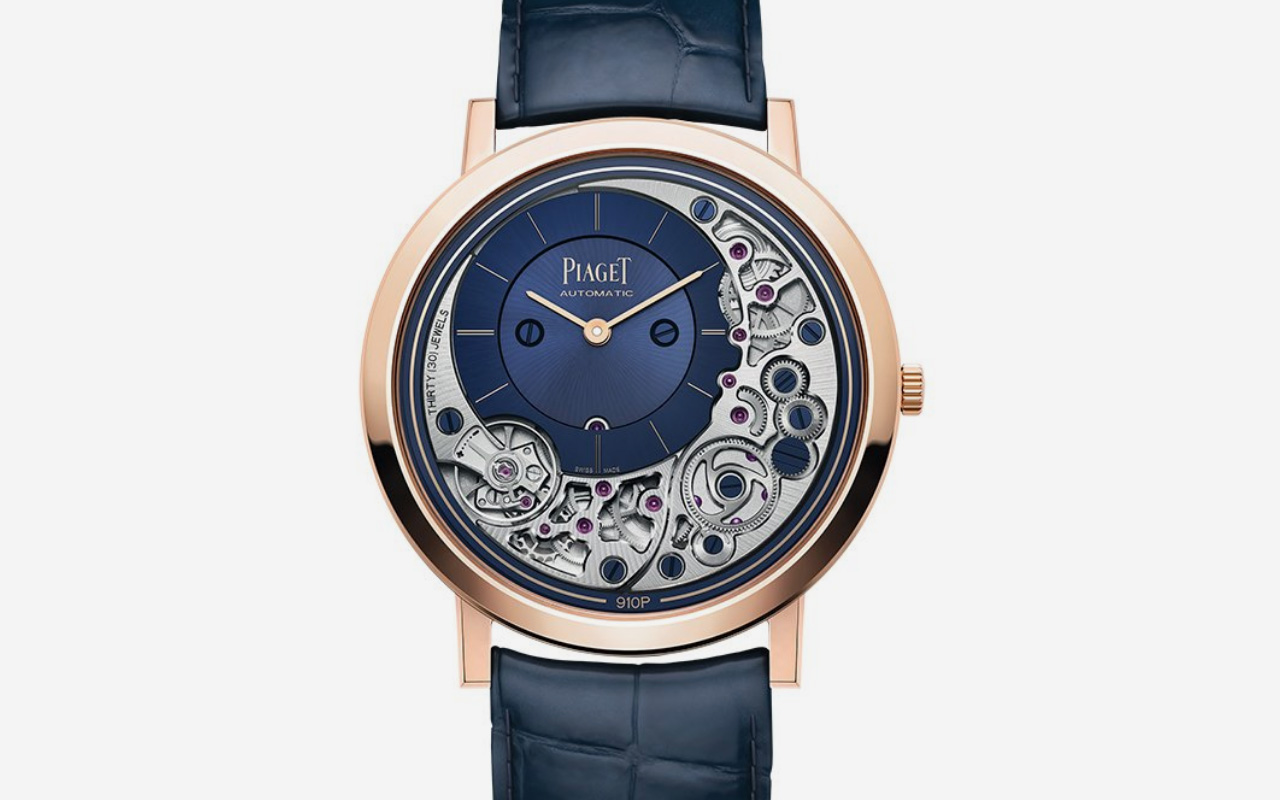 We have about three months on the calendar before the bids on some of the most exclusive timepieces commences. The occasion is the Only Watch Charity Auction and it will be held on the 9th of November, 2019. For those who have followed our previous coverage on special editions of the Only Watch Auction will recollect that this is a biennial event that raises money for research into Duchenne Muscular Dystrophy.

About fifty one-off luxury timepieces will go under the hammer and these are watches that are crafted by some of the finest watch makers of our times. Almost all of them are one-off collaborations and original experiences.

While the event takes care of an extensive tour schedule to showcase the exclusive watches, the seven editions of this event has managed to raise more than 40 million Swiss Francs, which is quite commendable.

As the watches are donated for charity, ninety-nine percent of the proceeds go into the research projects. Patronized by collectors, philanthropists and watch enthusiasts, this project is overseen by HSH Prince Albert II of Monaco.

While we endorse the cause, here is a look at some of the fascinating exclusives that will be going under the hammer – Watches You Should Bid For.

As most Piaget watches go, this Altiplano Ultimate Automatic has very classic cues in its design language. The case measures 41 mm, but the thickness is only 4.30 mm. This confers on it the title of one of the thinnest mechanical watches in the world.

To accommodate the 910P movement in the slim profile case, Piaget has used the reversed movement construction where we see the bridges fitted on the dial side. The functions of hours and minutes are integrated into the caliber.

Crafted in the unique combination of rose gold and blue, the timepiece sports a caseback that is engraved with ‘Only Watch Unique Piece 2019’. The Rose Gold case is teamed with a blue hour display and a matching blue alligator strap. Under the hood is the Calibre: 910P – an ultra-thin self-winding mechanical movement.

CHANEL The J12 INSEPARABLE for Only Watch 2019

This year marks the 20th anniversary of the CHANEL J12 watch, and for ONLY 2019 we have two watches – a black and white matte ceramic J12. Under the hood is the new self-winding Caliber 12.1, which is a special black version and can be admired through the sapphire crystal.

Engraved on the sapphire crystal are the words ‘Pièce unique Only Watch 2019’, which marks the watches an exclusive for this event. The important point for these watches is the exclusive COSC certified, self-winding, Caliber 12.1, which comes with a five-year warranty.

I like how the dial has the number ‘12’ standing out the most, it looks especially classy in the black version of the watch. The watch is teamed with a highly resistant matte black or matte white ceramic bracelet. The case measures 38 mm and the boasts of 200 meters of water resistance. The self-winding mechanical movement gives us 70-hours of power reserve.

I really think the HUBLOT timepiece for ONLY 2019 is very classy – something to look forward to on your wrist. The watch boasts of a 45 mm Classic Fusion case that highlights the white gold bezel perfectly. Sporting sapphire along with the typical edges, bevels and facets of the artist Richard Orlinski, we see that the 54 baguette-cut topazes compliment the thematic of this watch.

This HUBLOT features a transparent look and supports an openworked architecture where you can easily see the gears, tourbillon cage and power reserve. The watch is presented in a gift box – Wild Kong –  crafted by the French Contemporary Artist, Richard Orlinski.

The Classic Fusion Tourbillon Sapphire Orlinski for Only Watch sports a 45 mm case that is polished and it hosts a faceted sapphire crystal. The skeleton dial is matte anthracite grey in color. Under the hood is the Calibre HUB6021, which is a manual-winding power reserve. The skeleton tourbillon movement is also inside. The watch is teamed with a transparent smooth blue rubber strap.

The Arceau L’heure de la lune ONLY WATCH is a dramatic piece that tries to capture the beauty of the moon and the celestial magnificence that it is. The watch places the moons in such a way that you get to see the phases of the moon, in both the northern and southern hemispheres.

Beneath the moon phases and the two subdials, we have a meteorite dial forming the base. The mother-of-pearl moons look spectacular and compliment the overall vibe of the watch. I personally like it when a watchmaker plays with the existing complication, to give us something new and different.

Under the hood is a Manufacture Hermès movement and is kept protected with the white gold case. If you look carefully, you will notice the galloping horse on the moon dial, playfully reminding us of the origins of Hermès.

At 12 o’clock, the moon showcases a Pegasus designed by the “dreamer-designer” Dimitri Rybaltchenko. Called the Pleine Lune or Full Moon, the winged horse reminds us to keep the magic alive within ourselves.

At 6 o’clock spot, we see the second moon and this one gives us a realistic view on the moon’s surface. Under the hood is the Manufacture Hermès H1837 movement and is a mechanical self-winding piece. The case measures 43 mm and is teamed with a matt alligator strap in graphite grey with a blue zephyr calfskin.

The dial takes its inspiration from tattoos and maybe this why it feels very familiar. The 2019 Escale Spin Time for the Only Watch uses Grand Feu champlevé enameling process and is painted by hand. The dial is made by Anita Porchet, who is a renowned independent enameler. It took 200 hours and two specific traditional techniques – Grand Feu champlevé enameling and miniature painting, to craft this watch.

Under the hood is the LV79 caliber, which is developed and assembled by La Fabrique du Temps Louis Vuitton. It is supported with a 41 mm – 18K white gold and titanium Escale case. The watch also features diamonds and rubies 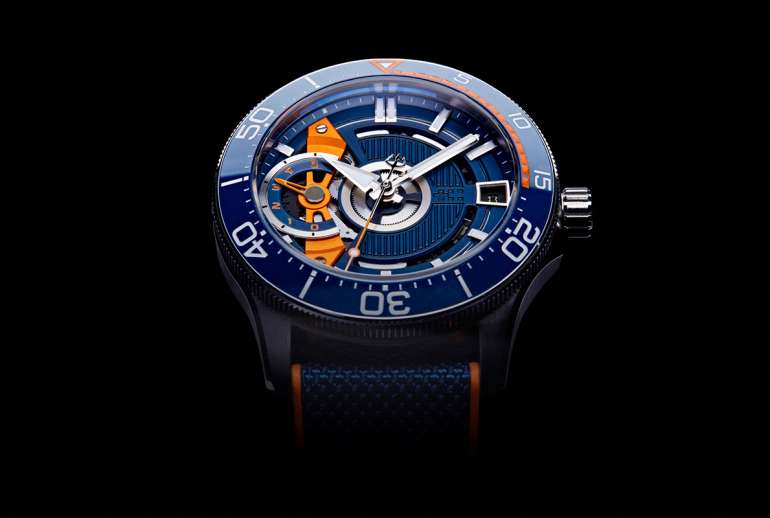 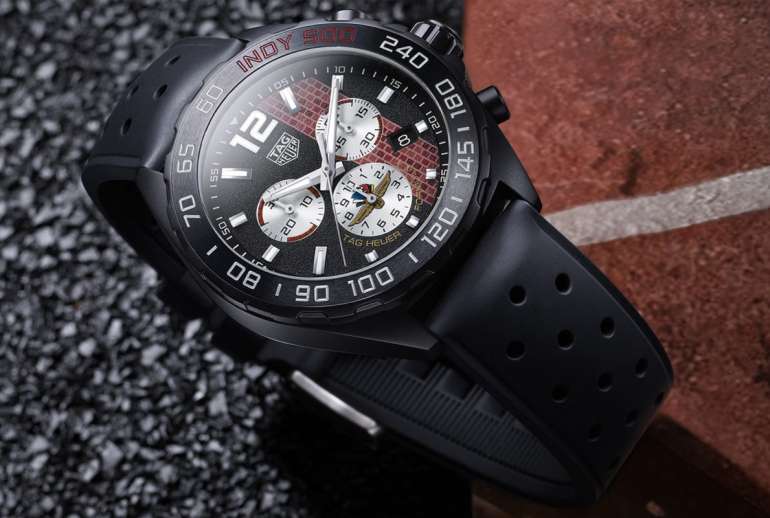